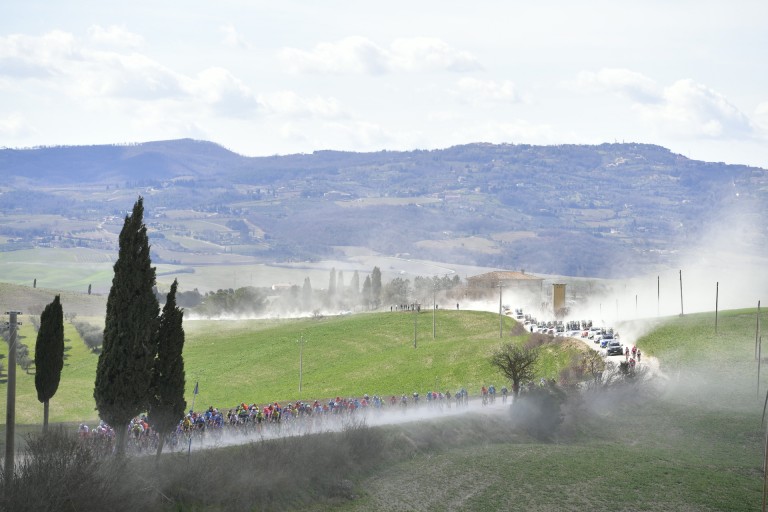 RCS Sport has today announced its selection of wild card teams that will participate at four out of its six UCI WorldTour races: Giro d’Italia, Tirreno-Adriatico, Milano-Sanremo, and Strade Bianche.

On Friday 8th March, at the start of the weekend of the Strade Bianche pro race and gran fondo, the Terre di Siena Slow (TSS) project was presented in Siena. It is promoted jointly by the Provincial Administration of Siena, the Municipality of Siena (leading body), 32 Municipalities of the Province of Siena and local sports associations such as the Bici Club Terre di Siena, ARI Association, FIAB Siena and the Eroica.

The men’s edition of the ‘Northern Classic in the South of Europe’, now in its 13th edition, organised by RCS Sport/La Gazzetta dello Sport and part of the UCI WorldTour calendar, started today from Siena at 10:40 with 147 riders.

2019 Strade Bianche NamedSport – all set for the gravel challenge

Strade Bianche NamedSport 2019: where to watch it

The international broadcast feed of the 13th edition of the Strade Bianche NamedSport, produced by the host broadcaster RAI, will cover the final two hours of the race live, and will be distributed in 151 countries around the world and cover all five continents across 14 different TV networks. Record coverage for the Strade Bianche Women Elite Namedsport, now in its 5th edition, which will be covered in the last hour of racing.

A great battle is expected on the course of Strade Bianche on Saturday 9 March. Last year’s winner, Tiesj Benoot, and many other champions are also announced at the start, including the 2018 Tour de France winner Geraint Thomas, multiple Grand Tour champion Vincenzo Nibali, previous Strade Bianche winners Moreno Moser (2013) and Zdenek Stybar (2015) and his team mate Julian Alaphilippe, Olympic Champion Greg Van Avermaet and former Cyclocross World Champion Wout van Aert amongst many others. In the Men’s race the 21 teams are each made up of seven riders, while the 21 Women’s teams will be composed of six athletes each – with dossard no 1 to be worn by last year’s winner and UCI Road World Champion, Anna van der Breggen.

The Official Guide of the Strade Bianche Men and Women Elite scheduled on 9th March is now available. Download it here.