In a different way but with the same result, Van der Poel made the best of the hills to outclass even the world’s best climbers like Julian Alaphilippe (Deceuninck-Quick Step) and Egan Bernal (Ineos Grenadiers) who rounded out the podium. 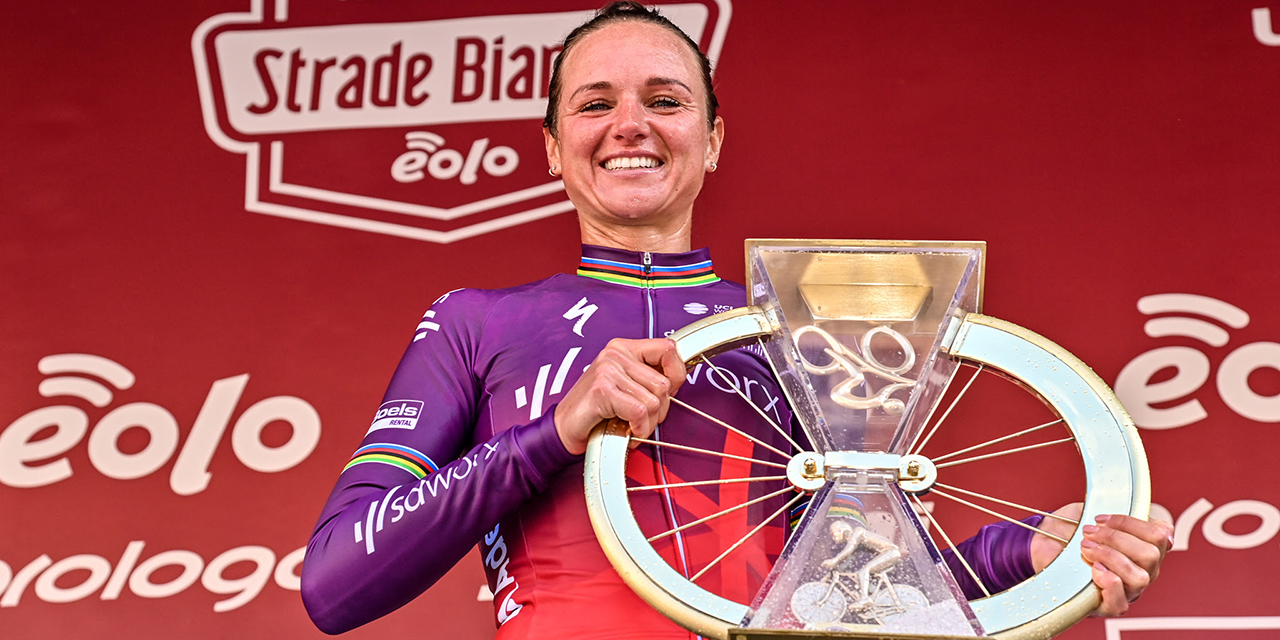 Mathieu van der Poel, the winner of the 15th Strade Bianche Eolo, said: “This is an iconic race and I really wanted to win it. I think Strade Bianche is one of the most difficult races to win because there are so many good riders, including strong climbers like Pogacar and Bernal. It does not happen often to find so many champions, including GC riders, fighting for the victory of a one-day race. Today I rode with confidence, I felt pretty good, and tried to save some energy for the finale and wait for the right moment. I knew there were some hard sections to come. As a team, today we showed how good we are. I have lots of confidence in my teammates; I trust that they are able to bring me to the right place in the key moments of the race. Next week I’ll be at Tirreno-Adriatico; I might try to go for the stages while I’ll try to get in the best shape for Milano-Sanremo”

Runner-up Julian Alaphilippe said: “I always prefer to win but I can be happy with this podium finish. I did my best and I have no regrets. I fought for the win but Mathieu [van der Poel] was the strongest. When I accelerated with about 20km remaining I realized the difference between Mathieu and Wout van Aert. My feelings weren’t so bad, so I stayed focused but, in the last climb, Mathieu was obviously the strongest. My next goal will be to win a stage at Tirreno-Adriatico.”

Third on the podium, Egan Bernal said: “To be honest, it’s a bit of a surprise for me to make the top three because I’m not a specialist of one-day races. To reach the podium with Mathieu van der Poel and the world champion [Julian Alaphilippe] is a big honour for me. It motivates me for the next goals and gives me confidence. Tom Pidcock and I tried to stay with the favourites because it was too hard to try and go away alone. Mathieu, [Wout] van Aert and the UAE Team Emirates riders were really strong. The finale was just a question of having the legs.”

Chantal van den Broek-Blaak, the winner of the 7th Strade Bianche Women Elite Eolo, said: “The finale went very quick. I was in the front in a small group with some other teammates. It was my job to attack. When I saw Elisa Longo Borghini following me I was confident. Of course, I knew she is super strong but I also knew there were other teammates in the group behind us. My team told me to sit back in Elisa’s wheels. I knew she would have continued pushing because she had less chance than me, and of my teammates, to win in case of a small group sprint. I was feeling good, while Elisa was spending a lot of energy. I managed to stay with her and eventually drop her on the last climb. I am very happy. This is unexpected. Wins like this one are the best ones in cycling.”

Runner-up Elisa Longo Borghini said: “I wasn’t irritated nor frustrated when Chantal [Vandenbroek-Blaak] didn’t cooperate with me at the front. I just wanted to give her a go. Sometimes, you just have to try and get the other rider to work. I absolutely knew that she wouldn’t work with me because normally I’d drop her in a climb like this. But today she had something more in the legs. Therefore, I’m pretty satisfied with my race and my result. I made the podium thanks to my team Trek-Segafredo.”

Third on the podium, Anna van der Breggen said: “When I crossed the line it felt like a team victory as I knew Chantal had won. It’s a really great achievement because Elisa [Longo Borghini] is normally one of the strongest riders here. As for myself, I had kind of a bad day so I’m satisfied to finish on the podium. We had a strong team. It was a very tiring and exciting race. I’m glad it’s been a very good one as this was my last Strade Bianche as a rider.”

Van der Poel, Alaphilippe and Bernal make the second youngest podium in 15 editions of Strade Bianche with an average of 26 years and 128 days, just behind Benoot, Bardet and Van Aert (24 years and 341 days in 2018).

First-ever Dutch victory in the men’s race, The Netherlands being the 10th winning nation. In the women’s race, it’s the fourth Dutch win in seven editions, all consecutive.